(What are the freezing and melting points of krypton?)

(What are the freezing and melting points of krypton?)

For some reason, a lot of people want to know what the element krypton looks like. It turns out that you look at krypton every day, although you may not actually see it. Krypton is one of the gases that makes up the earth's atmosphere. Unfortunately for all of the krypton fans out there, there is very little krypton in the atmosphere. The earth's atmosphere is roughly 0.0001% krypton, or about one part per million.

Things become more interesting when an electric current is sent through a container of low pressure krypton. When this is done, krypton lights up in much the same way a fluorescent light bulb does and glows with a smokey-white light. This glowing gas is called a plasma. A plasma is a state of matter that is different than solids, liquids and gases, the more familiar states of matter. Although similar to gases, plasmas contain ions and free electrons. When one of the free electrons joins with one of the ions to form a neutral atom, energy is lost by the electron. This energy is usually emitted in the form of light. The color of the light depends on the amount of energy lost by the electron. Electrons that lose a little energy emit light towards the red end of the spectrum while electrons that lose a lot of energy emit light towards the blue end of the spectrum.

The exact spectrum emitted by a plasma depends on the available energy levels of the ions it is made of. Different elements produce different spectra when they are emitting light as a plasma. This is sort of like a fingerprint composed of light. Ever wonder how scientists know what the sun and other stars are made of? Scientists are able to match the patterns they see in an object's spectrum with the patterns produced by elements they have in their laboratories. So, if they see a pattern that matches krypton's, they know that there must be some krypton in that object. 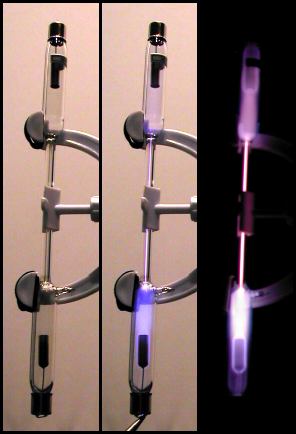 Left - Krypton gas in a sealed glass tube. Center - A Tesla coil is used to excite the atoms in the gas, creating a plasma. Right - A longer exposure of the plasma with all of the room's lights turned off.

The Composition of the Earth's Atmosphere

The Periodic Table of Elements

For questions about this page, please contact Steve Gagnon.